Sweden is a combination of incredible countryside vistas and cosmopolitan city charms. Holidaymakers flock to this Scandinavian hotspot all year round. Some head for the snow-capped mountains during winter, while others come to bask in the midnight sun come summer. Two thirds of the country is covered in forest and 30 national parks showcase its natural beauty, making it a paradise for hikers and tree huggers.

It’s easy to see why its capital, Stockholm is described as one of Europe’s most beautiful cities. Located on 14 islands, you’re never far from the waters of Lake Mälar. Stroll along the pristine streets of the Medieval Old Town and you'll stumble upon the city's most historic architectural landmarks, including the decadent Royal Palace, Stockholm Cathedral and the multicoloured houses of Stortorget, which look like they've been lifted straight out of a story book.

Holidays to Sweden wouldn’t be complete without fully immersing yourself in the culture. More than just a coffee break, Fika is a sacrament to friendship - a moment to appreciate the small pleasures of day-to-day life - coffee and a cake just happens to be part of it.

It’s not difficult to find fantastic things to do in Sweden. The north, dubbed the Swedish Lapland, is where you’ll see the country’s most dramatic scenery. Many people also flock here to catch a glimpse of the Northern Lights.

Alternatively, there’s Stockholm. The country’s capital makes a perfect weekend getaway and is a great introduction to the Scandi way of life - and cooking. Stockholm has serious culinary chops, boasting a collective 13 Michelin stars and brimming with exciting new concept restaurants, where food is farm-to-table fresh or foraged from surrounding forests.

Just 40 minutes down the road, you can visit the Drottningholm Palace, the official residence of the Swedish Royal Family, which is bound to leave you awestruck. If you want to dive deeper into the culture, there are tons of museums at your fingertips. Marvel at the world’s only preserved 17th century ship at Vasa Museum or walk in the footsteps of one of the most influential bands in the history of pop music at Abba the Museum.

Those seeking warm, mild days should visit Sweden between May and September. Come winter you’ll need to pack your woolies with subzero temperatures lasting until at least March.

The nearest international airport is Stockholm Bromma Airport (BMA) with direct flights from a number of UK airports. It is located just six miles from Stockholm centre.

Outdoorsy types: Home to dramatic mountains and hiking trails in the north and sandy beaches connecting you to the Baltic Sea in the south, Sweden is jam-packed with natural delights. Plus, with snow covering most of its landscape during the colder months, winter is just as scenic!

Romantics: There are plenty of places made for strolling hand-in-hand when you come to this Scandanvian gem. Stockholm is full of dreamy spots with its fairytale charm and intimate cafes, while its sunset dinner cruises make for the perfect date night.

Culture vultures: Getting your cultural fix couldn’t be easier in Sweden. Head for its blend of  historical museums and modern art galleries or immerse yourself in the folklore traditions, many of which are still alive today. The food culture is also worth checking out with the pickled herring dating back to viking times.

Language: The official language of Sweden is Swedish, which is spoken by the majority of the country’s population. However, minority languages also exist including Sami and Finnish. You may find that many Swedes speak perfect English, but it’s always a good idea to learn a few basic phrases.

Currency: The Swedish Krona (SEK) is the official currency

Local time: Sweden is one hour ahead of the GMT/UK time.

Fly to: The nearest international airport is Stockholm Bromma Airport (BMA) with direct flights from a number of UK airports. It is located just 6 miles from Stockholm centre.

Visa / Health: Before you travel, check the latest advice from The Foreign, Commonwealth & Development Office.

By hire car: With a combination of high-quality roads and less traffic than the UK, driving in Sweden is a great way to get from A to B. And to make things even easier, you can always pre-book your rental before you travel courtesy of our car hire partners.

By bus: For a budget-friendly transport option, purchase a bus ticket and discover a new corner of the country. There are plenty of routes and local services readily available too.

By train: Travelling by train in Sweden is worth it for the views alone, not to mention extremely relaxing thanks to the modern, comfortable Scandavian design. The country’s largest railway station can be found in Stockholm where you can take both local and long distance journeys.

National Day: This annual celebration takes place on 6th June to mark the election of Gustav Vasa as King in 1523. On this day a flag ceremony will take place and locals dress in traditional blue and yellow costumes.

Midsummer: Celebrated throughout the country, on the longest day of the year, which is towards the end of June, this is one of Sweden’s largest festivals.  You’ll see public parks and green spaces filled with maypole dancing, people picking flowers and traditional dress, not forgetting to mention the copious amounts of food and drink.

For up-to-date advice on travelling to Sweden, please visit the FCDO website.

Sweden’s geographical position means it sees warm summers and harsh winters. For those seeking 20°C temperatures, July is the warmest month - this is also a great time to see the midnight sun, which means the sun shines until 11pm in the south and never fully sets in the north.

Spring is ideal for sightseeing without the crowds, not to mention the perfect time to witness the first flowers bloom. As autumn approaches so does the colder weather and snowfall is highly likely, particularly in the north. February generally witnesses the coldest temperatures but the daylight hours are longer. 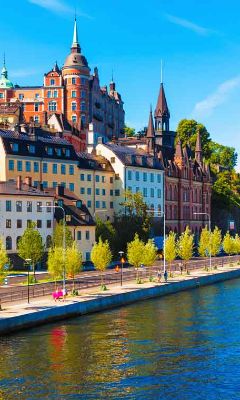 Search all holidays in Sweden
Looking for other holidays?
Trustpilot